Nowadays the soy milk It is one of the most consumed vegetable milks, especially for being an adequate option in case of lactose intolerance, thanks to its nutritional properties Y Benefits most important, in addition to its pleasant flavor.

As this article is quite long, we believe that it may be useful to quickly access the following sections whenever you want:

Soy milk is obtained from soy and water, and like cow's milk can be used to make creams, sauces, smoothies ... and even ice cream. However, we must warn that it is not a milk in itself, even though it tends to be considered in this way. It would be more appropriate to consider this drink as soy drink or soy juice. Not in vain, soybeans are the only legume that has all the essential amino acids for the body, so it digests easily and prevents certain diseases.

The most important thing is that it contains lecithin, a substance that, among other issues, prevents heart problems and helps keep arteries clean.

In addition, it contains isoflavones, which are plant estrogens that have a very small estrogenic action compared to that of true corporal estrogens. It is believed that this mechanism offers a protective action against breast cancer in women.

In regard to osteoporosis, the proteins from soy help to preserve body calcium, counting that the aforementioned isoflavones also inhibit the process of bone destruction.

These same proteins are able to reduce the oxidation speed with cholesterol, also reducing the cholesterol and triglycerides.

The fatty acids which they possess are polyunsaturated ( arachidonic, linoleic Y linolenic), which are omega-3 essential fatty acids that have no cholesterol and whose deficit slows growth, and cause skin diseases and nerve disorders.

Of course, all these properties we must add that soy is a very good source of essential amino acids, necessary for both development and growth. However, as we will see later, it is not recommended for children under 5 years of age.

Soy milk is equally ideal for both the elderly and young, being suitable for diabetics, and is perfect for people who are lactose intolerant. As long as it is consumed in moderation and alternating it with other vegetable drinks.

What is soy or soy milk?

Soy milk is a vegetable drink made from soybeans or seeds. It is obtained by soaking these seeds in water, which are subsequently ground and filtered, resulting in a characteristic whitish-colored drink. It is, as you probably know, one of the most popular vegetable drinks, although it is true that today you can find in most supermarkets different options made also from other seeds, cereals and nuts, such as case of almond milk, oats or rice.

And what is transgenic soy?

It is any variety of soybeans genetically modified by genetic engineering techniques, with the objective of expressing genes from other organisms, be more resistant to insects, present tolerance to herbicides, and in some cases modify their properties or nutrients.

Different nutritionists and dietetic associations denounce that the majority of the soy that is consumed is of transgenic origin. Probably from that would derive most of the harmful effects that we talked about in the following sections, so that only the consumption of soy labeled as organic would be advised.

And how do you get it?

Soy milk is obtained from white soy beans and water, which must remain soaking for at least 12 hours and then be crushed, cooked for 45 minutes and cast.

It is a drink especially rich in essential amino acids, necessary for growth and development. It therefore becomes a good option for children and the elderly.However, in the case of infant nutrition, it is not recommended for children under 5 years of age (if they are older, it is best to consult a pediatrician). In addition, it is well tolerated by diabetics. Soy milk is rich in protein, calcium, phosphorus and B vitamins

In addition, it has a good relationship between calcium and phosphorus. Also interesting is its magnesium content, useful in hypertensive people, heart problems and osteoarthritis, and helps in the assimilation of calcium.

In addition, its iron content is also certainly high (see more information in the following section), also being a really good source of Group B vitamins, especially vitamin B6 and folic acid.

Of course, considering that it has a lower amount of nutrients (compared to those found in cow's milk), the most advisable is alternate consumption of soy drink with other vegetable milks (Find out more about vegetable milks), such as oat milk or almond milk. The most important properties of soy milk, in summary

Here we summarize what are some of the main properties of soy milk:

From a nutritional point of view soy milk stands out mainly because lacks cholesterol, being therefore suitable for people who have high levels of fats in the blood.

On the other hand, it has the same amount of B vitamins as cow's milk, and surprisingly, a greater amount of iron.

Different health specialists have advised against its use in children under 5 years of age, and especially in children under 2 years of age. Especially because there are other dietary alternatives that the youngest ones need in such an important stage as development and growth, without consuming exclusively soy beverages and derivatives.

Many nutritionists do not advise its use in children under 5 years.

Among these alternatives we can find vegetables (spinach, kale, onion, watercress, Swiss chard ...), legumes (white beans, chickpeas and lentils), fish (sole, salmon, sardines and anchovies), as well as nuts (almonds) and hazelnuts), and the yolk of the eggs. Why has soy drink been such a criticized drink?

There is no doubt that in recent years soy milk has counted on defenders and detractors on the different benefits or disadvantages that would contribute to health when consumed on a regular basis within a balanced diet. To this we must add the different advertising campaigns that have defended their benefits as an alternative for people intolerant to lactose.

The truth is that, like everything, Exaggerated consumption of any food tends to have negative consequences for health. And, obviously, the same thing happens with the soy drink.

Therefore, as we have seen throughout this note, we are facing a healthy drink from a nutritional point of view, but that also brings a series of negative effects. Which leads us to ask ourselves a question: is it a good or bad drink for health?

The reality is that we are faced with a question that keeps divided a good number of nutritionists and doctors from half the world. Some advise its consumption, others recommend it but with moderation, and others advise against its consumption.

On the negative effects of regular consumption of soy milk

Different scientific studies have been able to verify the effects that regular consumption of soy drink has on our organism, especially when we are faced with a vegetable drink made from transgenic seeds or soybeans. The main negative effects are summarized below:

This section is a summary of the article Harmful effects of soy consumption. So, can I or do I not drink soy milk?

At this point it is normal that most of our readers are, at least, confused and confused. Can I drink soy milk with ease? Is it good for your health or is it not good?

As we have seen throughout this article, the truth is that the scientific community itself does not agree on whether soy -and its derivatives- are a healthy and nutritionally recommended food; or on the contrary: it is a harmful food. There are scientific studies that have been able to verify its benefits, and also its negative effects.

It is best to opt for organic soy milks, made from soy beans from organic farming. In this way we make sure that it is not transgenic soybeans.

In fact, it is true that, in the particular case of soybean, practically the same thing happens with other foods: in addition to providing nutritional properties and benefits, it also presents contraindications and certain side effects, so that the consumer would face a large Tessitura on whether to consume it or not.

It seems that there is a consensus to put aside the transgenic soy, which is probably the main culprit for its not so positive effects. Therefore, the recommendation would be mainly to opt for soybeans not genetically modified, for which we must look at their labeling and acquire only that which specifies that it is soy from organic farming.

Therefore, our recommendation in any case is obvious: be fully informed about its advantages and disadvantages, and ask our doctor or nutritionist about whether or not we can really consume it. Their benefits should not be underestimated, but neither should they turn a blind eye to their negative effects.

Therefore, as we mentioned in a previous appointment, the best option is to opt for organic soy drinks. And not only soy milk, but also any other vegetable drink that we usually consume. How to make soy milk or soy drink? Discover our recipe

The soy milk recipe It is really a recipe that is very easy and simple to follow, especially because only a few ingredients are needed, and because its preparation is quite simple. You dare?.

What to do with the resulting paste that we do not use?

If you wish, after casting it, you can use the final paste to make desserts or soups, thanks to the fact that it is very rich in essential nutrients.

This article is published for informational purposes only. You can not and should not replace the consultation with a Nutritionist. We advise you to consult your trusted Nutritionist. ThemesSoybean vegetable drink 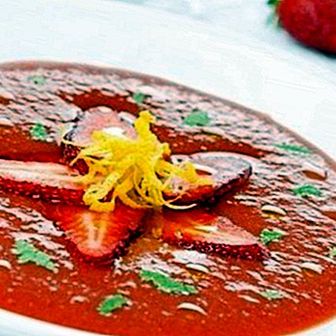